Giants of Eye Street: Profiles of Some Gonzaga Greats 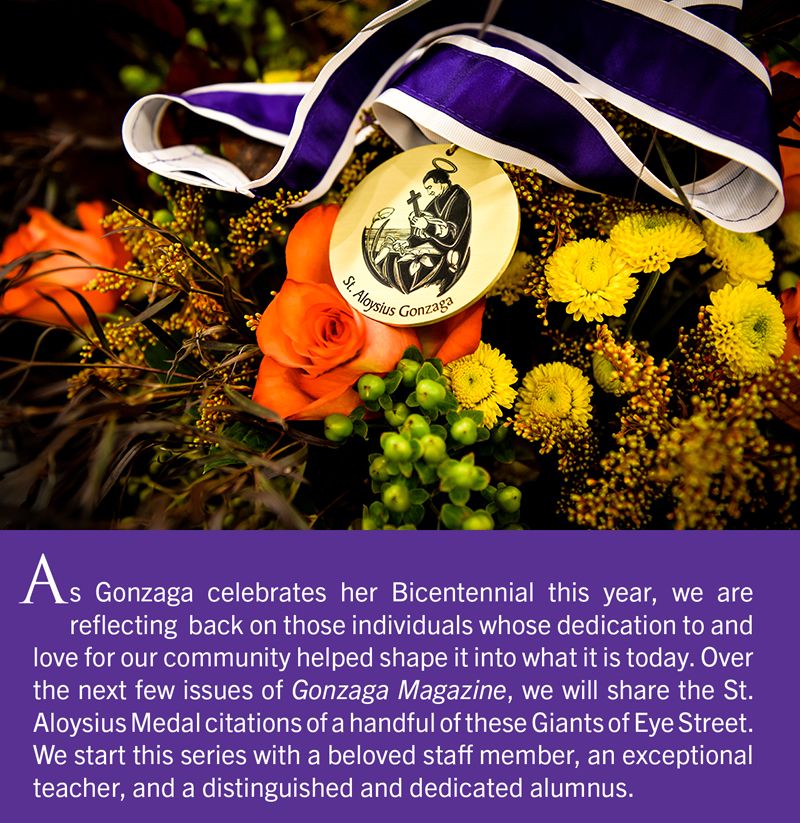 For the last 26 years, no one who has ever called the Headmaster's Office has been untouched by graciousness. There is one source of that gentility: Mrs. Opal Bell.
During that time Mrs. Bell has served the school as the Registrar. She has made sure that five headmasters have done their job properly. She has been President of the Mothers Club and served on the school's Professional Committee.
Many people have been involved in the school during the last quarter century. Some have been responsible for the school's financial stability; others have been responsible for its academic excellence; some for athletic success; and yet others for the spiritual health of our community. No one, however, has cared for and loved each of us as Mrs. Bell has.
For these many years she has set the tone and the lead for Gonzaga's unique brand of love and spirit. She has been there for each of us when we have had good days and bad days. She is a point of reference for the veterans and she is a beacon of hope for frustrated and confused newcomers. Without Mrs. Bell we all would have been diminished.
While there have been many memorable personages here on Eye Street, there has been only one Mrs. Bell. For example:
There is only one person here who can get away with using words like: biffle baffle and scrummy. There is only one person here who can interject into a serious conversation a sentence stopping exclamation like: “I smell turnip roots cooking.” And there is only one person who can elicit comments from her admirers, such as the following:
From Paul Burke, here is a representative 30 second conversation with Mrs. Bell:
Two minutes before class: “I need bluebooks for my seniors, Opal, you got any?”
“In the corner, Paul; here's your paycheck - did you try a cookie?”
“Opal, Have you seen Fr. Smith lately?”
“I saw him at the game--he's looking better--he's such a neat guy.”
“By the way, Ope, when is that rescheduled meeting?”
“Today! And don't forget it's in the Board Room, not the chapel, and be sure you sign up for the van if you need a ride to the retreat. And don't forget the Mothers Club sign up sheet.”
“Who's the new Mothers Club president?”
“Mrs Jones---remember her older boy? He was so good-looking, and smart as a whip.”
“Have you tried the new phone system, Opal?”
“Dial 7177---I just  got a message from my youngest, my baby, but don't tell him I call him that--- They're having a reunion, can you believe it, so many years, what a great class they were.”
“Where did you get the brooch, Opal?”
“Thanks, Mary Purdy gave it to me years ago; she's such a neat lady; that's one woman with class!”
And then from Fr. Longtin: “With her constantly bubbly laugh and charm, Opal has brought love, joy and warmth to Gonzaga for 26 years. Her presence is a reminder to us of how lovingly God holds each of us in His heart.”
Many others submitted Opal stories, but time prohibits me from reading them now. However, on behalf of all here, Opal, I simply want to say Thank you for loving us so much. No one deserves this recognition more than you.


In the 27 years between 1963 and 1990, Father Tom Wheeler taught thousands of boys, all of whom learned three secrets to ensuring a passing grade.
First, never claim to have misunderstood the assignment, because he wrote down everything-- in triplicate.
Second, should you ever be stuck for an answer, start talking about baseball, especially the New York Yankees. Doing so would at least buy you enough time for your friends to slip you the answer surreptitiously.
And third, if the great priest from Kansas City ever said, "Boys, the day I give you a pop quiz is the day I crawl through the window," then make certain to study that night and keep your eye on the window the next day, because as sure as his initials were T.F.X.W.S.J., Father Tom Wheeler would come climbing through, quiz in hand.
Not all great teachers climb through windows. But Tom Wheeler understood that boys learned more when they were having fun in class. Today, the men to whom he taught Latin, history and religion as boys, call Father Wheeler a great teacher.

And because we have learned from him the virtue of attention to detail, it must be mentioned that Tom Wheeler understood that if boys were to learn, they needed pencils and pens and bus tickets to get home. He was also for several years shopkeeper of the Gonzaga Bookstore.
It is, therefore, with much pride and thanksgiving that Gonzaga bestows upon this legendary teacher, Thomas F. X. Wheeler, S.J., the St. Aloysius Award for Service to School and Community.

A half-century ago on the battlefield of the Saar Valley, a 19-year old infantryman from Gonzaga College High School was, like so many of his comrades, hoping and praying that the end of the War was near and that he would return home. But in those days just prior to the Battle of the Bulge, it was not to be. A sudden enemy tank offensive overwhelmed his unit and he ended up a prisoner of war.
In living through those stressful and terrifying times, it is unlikely that the young American, his family, or friends gave much thought beyond the question of his survival. Thinking about life's long-term goals was not on the agenda. But on May 2, 1945, after five months in captivity, J. Alan Cassidy of the Class of 1942 was liberated and a life of extraordinary achievement and service to his community was about to begin anew.
He returned from the War to resume his college career, which had begun at the College of the Holy Cross following his graduation from high school, and in 1949, he earned a degree in Architectural Engineering from The Catholic University of America. Alan immediately went to work helping his father in the building products business and the rest is history. The highly successful James A. Cassidy Company and its main-line product, Pella Windows, are known throughout the Washington-Baltimore region and beyond.
In 1950, Alan made the wisest of all his wise decisions. He married Sally Gardiner and today he and Sally are the proud parents of eight children and thirteen grandchildren.
Throughout all of the years of success in his personal and business life, Alan never lost sight of the obligation intrinsic in the Jesuit motto, to be a "man for others." His generosity of spirit in serving the community has reached out to many people and places. Every school that has been involved in Alan's education has become a beneficiary of his talent and resources. As a child, he attended Blessed Sacrament School in the neighborhood where he grew up, and he has since served that faith community in numerous ways, including a term as President of its Parish Council. He is a devoted supporter of Catholic University and is presently a member of that institution's Board of Trustees.
Gonzaga has been uniquely touched by Alan Cassidy. He has walked beside his alma mater every step of the way as she sought to maintain her presence and viability in the heart of the nation's capital. Physical evidence of his generosity abounds throughout the school. He has never refused a request for help from Father Allen P. Novotny, Gonzaga's President or his predecessor, Father Bernard J. Dooley. Alan has been a member of Gonzaga's Board of Trustees for several years and in that role has assumed many important tasks. One of the most significant and long-lasting legacies of his leadership is the recently completed year-long effort to develop a campus master plan to guide and coordinate the improvement and use of the school's physical plant. This master plan is crucial to Gonzaga remaining in the front-rank of college preparatory schools in the 21st century. Without Alan's doggedness and determination, the plan would still be nothing more than a dream.